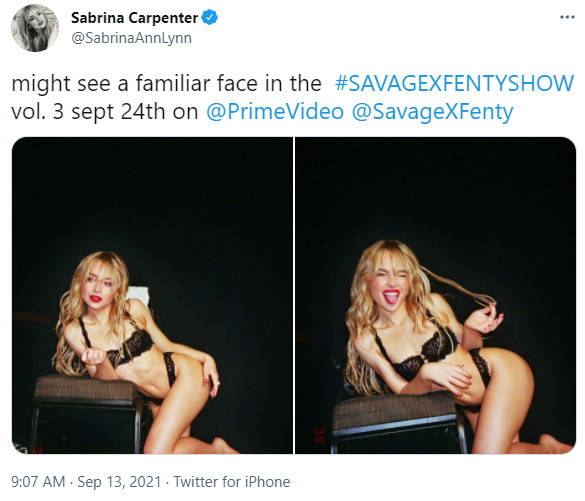 The third volume of the Savage x Fenty show will be making its Prime Video premiere on September 24, and Sabrina Carpenter will be involved.

To hype the upcoming event, the actress and singer released a set of photos in Savage X Fenty lingerie.

Carpenter looks characteristically gorgeous in the set, which amassed well over 800K Instagram likes and about 3000 Twitter re-Tweets in its first hour.

In addition to making waves with her involvement in the eagerly anticipated fashion event, Carpenter attracted interest for her new single “Skinny Dipping.” The song and music video launched late last week.

might see a familiar face in the #SAVAGEXFENTYSHOW vol. 3 sept 24th on @PrimeVideo @SavageXFenty pic.twitter.com/gJobsgdRn2