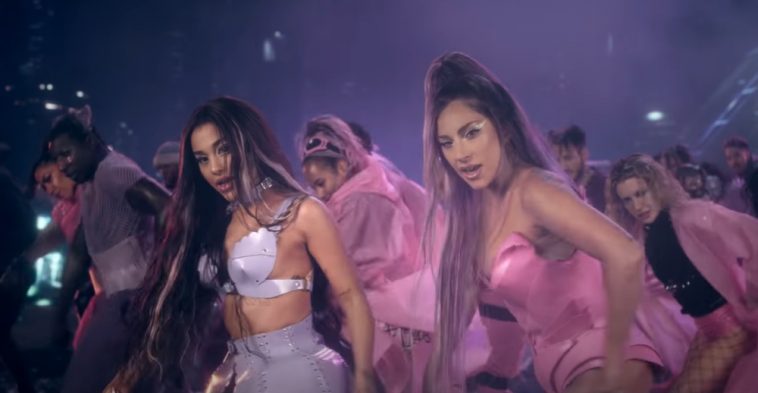 Powered by a strong week’s worth of sales, streams and radio, Lady Gaga & Ariana Grande’s “Rain On Me” debuts at #1 on the Billboard Hot 100.

“Rain On Me” seizes the throne from Megan Thee Stallion’s “Savage (featuring Beyonce),” marking the first time an all-female collaboration has replaced another at #1.

The #1 arrival also yields a record for Ariana Grande, who becomes the first artist to debut four songs atop the chart (every one of her #1 hits started at the top). She was previously in a tie with Justin Bieber, Mariah Carey and Drake, who each had three #1 starts.

“Rain On Me” meanwhile marks the fifth career #1 – and second chart-topping debut – for Lady Gaga. Gaga’s number one hits span three decades, as she first hit #1 with “Just Dance” in 2009, then scored three number ones in the 2010s, and now has a fifth in 2020.

From a component chart perspective, “Rain On Me” starts at #1 on Digital Song Sales and #2 on Streaming Songs. It does not yet earn a prominent Radio Songs chart position but is quickly amassing airplay at mainstream formats.