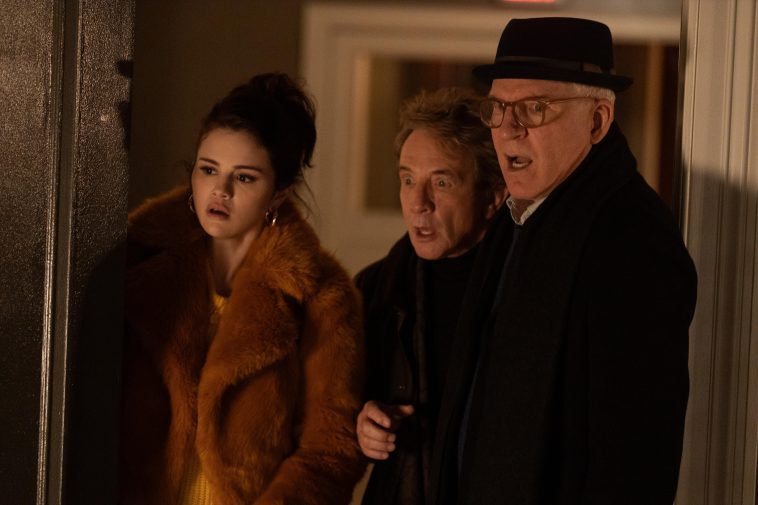 Only Murders In The Building -- "True Crime" - Episode 101 -- Upper West Side neighbors Charles, Oliver & Mabel bond over a shared love of true crime. When a fellow resident dies in their building, the trio determine to solve the mystery and record an accompanying podcast. Mabel (Selena Gomez), Oliver (Martin Short) and Charles (Steve Martin), shown. (Photo by: Craig Blankenhorn/Hulu)

One day before “Only Murders In The Building” makes its premiere, stars Selena Gomez, Steve Martin, and Martin Short will make a daytime television appearance.

The three will appear for a joint interview on the August 30 “Good Morning America.” That day’s episode will also feature an appearance by Simu Liu.

A Hulu Original, aforementioned “Only Murders In The Building” will launch on August 31.

“‘Only Murders In The Building’ follows three strangers (Steve Martin, Martin Short and Selena Gomez) who share an obsession with true crime and suddenly find themselves wrapped up in one,” says the official synopsis. “When a grisly death occurs inside their exclusive Upper West Side apartment building, the trio suspects murder and employs their precise knowledge of true crime to investigate the truth.”

Monday, August 30— Actor Simu Liu (“Shang-Chi and the Legend of the Ten Rings”); actors Steve Martin, Martin Short and Selena Gomez (“Only Murders in the Building”)