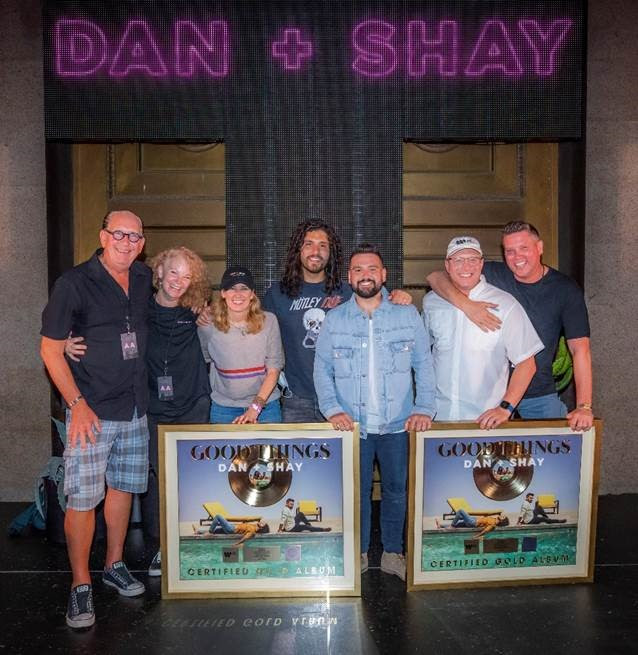 The past few days have been rather momentous for Dan + Shay.

The duo released a new album entitled “Good Things” and hit #1 at country radio with “Glad You Exist.” The duo also received another honor: a new certification from the RIAA.

Indeed, the “Good Things” album has already attained gold status in the United States. The certification confirms 500,000 in US units, with each equal to 1 album sales, 10 track sales, or 1500 track streams.

In confirming the certification, the Warner Music Nashville and RIAA teams noted that “Good Things” is the first country album in the streaming era to attain gold status at release.

The key to the certification is the success of pre-release singles “10,000 Hours” (4x platinum, 400K album units), “I Should Probably Go To Bed” (platinum, 100K album units), and the aforementioned “Glad You Exist” (gold, 50K album units). Those songs alone provided enough units for the honor.

“Three years ago, Dan + Shay made history with ‘Tequila’ – and have continued on a meteoric rise ever since,” said Warner Music Nashville Chairman & CEO John Esposito. “This extraordinary accomplishment is yet another testament to their unparalleled talent and work ethic. The first and only country album in the streaming era to be certified Gold upon release, are you kidding? That’s freaking insane! I couldn’t be one iota prouder that Dan + Shay are part of the Warner Music Nashville family. They are artists of a generation.”

“Congratulations to Dan + Shay on ‘Good Things’ becoming the first country album in the streaming era to be RIAA certified Gold at release!” added Mitch Glazier, Chairman & CEO, RIAA. “Dan + Shay are no stranger to high-ranking Gold & Platinum achievements. Every Dan + Shay album released has been certified Gold or Platinum by the RIAA. An album only goes Gold on release when an artist has forged the most enduring and energized connection with their fans. Congrats to Dan + Shay and their team at Warner Music Nashville on this awesome milestone, which reflects years of incredible music and hard work.”