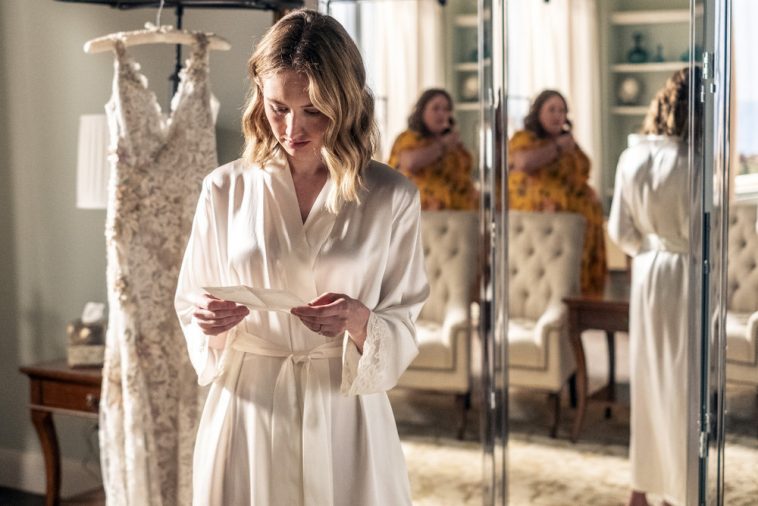 Update: KALEO’s “Way Down We Go” keeps moving up.

After appearing during a pivotal sequence in this Tuesday’s “This Is Us” season finale, the 2015-16 hit returned to the Top 30 on the US iTunes sales chart. As fans continued buzzing over the finale, and as the song moved up the iTunes “69-cent Alternative Hits” discount playlist, the song continued making gains on iTunes.

By early Friday morning, it was up to #5 on the all-genre chart.

For more details on said “This Is Us” finale, read the original story below:
====

Promotion for Tuesday’s fifth season “This Is Us” finale focused on the planned wedding between Kevin and Madison. By the end of the hour, however, fans would be talking about a different marriage ceremony.

Indeed, Kevin and Madison did not end up tying the knot in Tuesday’s broadcast.

To set the stage for the breakup, a set of flashback scenes provided a window into Madison’s background and state of mind. They specifically revealed how an absence of parental support — and some particularly cold advice from her father — conditioned her to “settle” when it comes to romance.

As she prepared to walk down the aisle, Madison decided that she could no longer settle. She finally recognized that she deserved to be with someone who truly loved her. And though Kevin loved the idea of raising their children together as a family, he did not love her — and could not bring himself to say otherwise when pressed. She ended up calling the wedding off.

Kevin received the expected consolation from his family. While providing support for her son, Rebecca also offered him a way to take his mind off the current situation: build her the house that Jack had hoped to build her. We already knew that the house was built; it has served as the setting for the flash forwards in which the Pearsons are at an ill Rebecca’s bedside. Now, we know the impetus behind the construction.

As is typical for a “This Is Us” finale, the episode concluded with a brief flashforward. It did not, however, jump to the same scene at Rebecca’s new home. Instead, the episode jumped to Kevin at the site of a future wedding. It was not, however, his own. It was that of his sister Kate.

Earlier in the episode, Toby accepted the new job offer in San Francisco, which will eventually require him to be away from home three days a week. Kate initially planned to quit her music teaching job so that she and the kids could relocate with Toby, but when she attempted to inform her boss Phillip of the resignation, he refused to accept. Kate and Toby agreed to each keep their jobs, confident their relationship could survive on only four days a week of face time.

Evidently, it could not. As had been hinted in past flash forwards, Toby and Kate breakup.

Based on the scene in Tuesday’s flash forward, her second marriage is to Phillip. Chris Geere, who plays the character, will reportedly become a series regular in the sixth and final season.

Other tidbits from the flash forward include the fact that Nicky is married, stationary indicating that Jack’s dream “Big Three Homes” business has come to fruition, and an article about Randall being a “rising star.” Kevin and Madison also appear to be on good terms, as they have a playful interaction when discussing Kevin’s wedding speech (Madison is a bridesmaid for Kate). Of note: the flash forward seemed to deliberately obscure Kevin and Madison’s left hands (to an almost comical extent in Kevin’s case), leaving fans to wonder about each’s marital status.

These climactic reveals were all set to KALEO’s former #1 alternative hit “Way Down We Go.” From a US iTunes chart standpoint, the timing was fortuitous: the song had already been rising due to a 69-cent discount promotion. Thanks to the combined effect of the discount boost and high-profile “This Is Us” feature, the song is #27 on the listing as of press time at 3AM ET Wednesday.