As of press time at 12:30PM ET Wednesday, the collaboration is up to #5 on the all-genre US iTunes sales chart. The song had been steadily climbing in recent days, with ongoing buzz and discounted pricing surely playing a role.

The sales ascent also coincides with the song’s growth at radio; “Best Friend” looks headed for #1 on this week’s Mediabase rhythmic chart.

“Best Friend” received 2,469 spins during the first three days of the March 28-April 4 tracking period. Up a mammoth 14% from the count at this point last week, the tally slots “Best Friend” at #1 on the Mediabase building/real-time chart. Based on its current lead and rate of gain, it should be able to retain its position through the close of tracking. The official chart will be published on Sunday.

As the world buzzes over her single, Saweetie has also been in the news following her breakup with fellow artist Quavo. Tuesday, TMZ released a video of the two having a physical altercation on an elevator while still together. 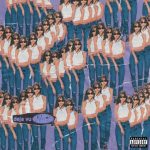