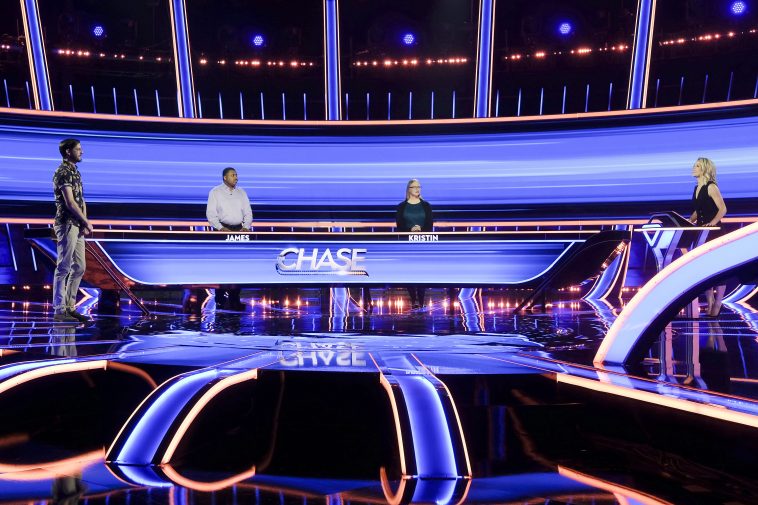 THE CHASE - ÒThe Chase is On!Ó Ð The race to ÒThe ChaseÓ is on in the series premiere of the new heart-racing quiz show where three competitors must pit their wits and face off against the Chaser, a ruthless quiz genius determined to stop them from winning cash prizes. Hosted by ÒThe ViewÓÕs Sara Haines and starring ÒJEOPARDY! The Greatest of All TimeÕÕs James Holzhauer, Ken Jennings and Brad Rutter as the Chasers, ÒThe ChaseÓ premieres THURSDAY, JAN. 7 (9:00-10:00 p.m. EST) on ABC. (ABC/Ron Batzdorff) JACKSON MUSKER, JAMES HILL III, KRISTIN SAUSVILLE, SARA HAINES

None rivaled the performance of last January’s “Jeopardy: The Greatest Of All Time” tournament, but ABC’s “Celebrity Wheel Of Fortune,” “The Chase,” and “The Hustler” all performed well Thursday.

Airing at 9PM, “The Chase” drew a 0.9 rating and 6.20 million viewers. It defeated all broadcast network competition in its timeslot, while ranking as the overall night’s #2 broadcast show in both columns (after “Celebrity Wheel”).

“The Hustler” closed the night with a 0.7 rating and 3.81 million viewers, winning its timeslot in both areas. It tied FOX’s 8PM series “Hell’s Kitchen” as the night’s #3 broadcast performer in adults 18-49 (trailing only the aforementioned ABC game shows).