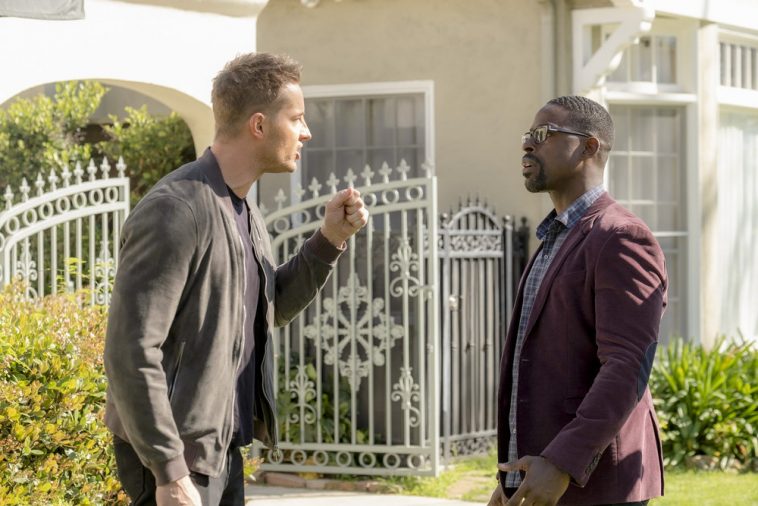 Living up to expectations for a milestone “This Is Us” episode, Tuesday’s fourth season finale introduced new characters, expanded the show’s mythology and emphasized new mysteries.

To calibrate the action, Tuesday’s episode quickly established some clear, recognizable settings. The future timeline saw grown-up Jack Damon and his wife Lucy preparing for the birth of their child. Past Jack and Rebecca celebrated The Big Three’s first birthday, while the present Pearsons congregated in Los Angeles to celebrate baby Jack’s first birthday (and hear Rebecca’s Randall-influenced plan to undergo the experimental treatment in St. Louis).

The episode also introduced two more mysterious scenarios. One focused on an art gallery employee named Hailey (played by Adelaide Kane). When rejecting a date from her friend and coworker, an intimation was made that she recently had a one night stand with a movie star – who was potentially older than her. Clearly, the writers wanted viewers to suspect that she was talking about Kevin.

It turns out that she has a different connection to the “This Is Us” universe. The episode revealed that Hailey is Jack Damon’s sister (Kane’s iteration of the character exists in the same, future time period as Blake Stadnik’s grown-up Jack). Signifying a close relationship, Hailey abruptly left work to be with Jack and Lucy as they gave birth to their daughter Hope.

The sister reveal came as present-day Toby and Kate decided to have another child. They began making plans to adopt, noting the almost certain complications of Kate getting pregnant, but the episode did not explicitly state that they adopted Hailey. Season five will surely answer more about Hailey.

Eli Mason (Josh Hamilton), another new character, was introduced to viewers alongside his daughter Sadie (Glory Joy Rose). The two were attempting to tame a new horse; proving more adept at the task, Sadie advised her father on the importance of giving individuals the chance to be themselves.

We soon learned that Eli was an OBGYN, and he imparted his daughter’s wisdom on his patient: Madison. Indeed, Madison is pregnant with twins, and Kevin is the father. Madison had not told anyone about the pregnancy, but Eli encourages her to share the news. Kevin (more on this later) agrees to support Madison through the pregnancy and be a present father for the children.

Eli’s introduction coincided with scenes of Dr. K. comforting Jack and Rebecca on their children’s first birthday. Creator Dan Fogelman told media that the juxtaposition is no coincidence, noting that Eli will be an “important character” for Kevin next season as he and Madison deal with their unusual relationship and pregnancy. Some fans, however, are sure to question whether there is a more literal connection between the two doctor characters.

Other notes from the episode:

— Thanks to another flash forward this season, we learned that Kevin and Randall were not speaking. Tuesday’s finale explained why: after learning that Randall pressured Rebecca to get the experimental treatment, Kevin angrily confronted his brother. The intense blow-up ended with Randall saying Kevin was a source of shame for their father, and Kevin saying that the worst day of his life was the day Jack and Rebecca brought Randall home.

— The argument did, however, help drive Kevin’s decision to support Madison and their twin children. His commitment to the children seemingly sticks. In a return to the flash forward at Rebecca’s (presumed) death bed, we see Kevin with his two kids – a boy and girl – that are presumably the fraternal twins he had with Madison. We also see that future Kevin is wearing a wedding ring, but we do not yet know if Madison is his wife.

— With regard to that scene and wedding rings, it is worth noting that future Nicky, who is by Rebecca’s bedside, is also wearing such a band. In the present, Nicky is still going to AA meetings with Cassidy.

— Another note from the Rebecca flash forward scene: although their dynamic is hard to read at first, future Kevin does put his arm on Randall’s shoulder as they prepare to say goodbye to their mother.

— The past Jack-Rebecca timeline finds the Pearson parents addressing their emotions about Kyle, their triplet who did not survive the birth.

“This Is Us” will return for season five in fall.