After six weeks of auditions, challenges and eliminations, “The Four: Battle For Stardom” will give some of the season’s standout contestants a second chance.

Set to air at 8PM ET/PT on Thursday, July 26, this week’s episode features eight “comeback contestants.” The contestants will face each other in four one-on-one battles. Those who emerge victorious will get to challenge a member of The Four for one of their seats — and a ticket to the season finale.

Per FOX, the comeback matchups are as follows: James Graham vs. Jesse Kramer, Whitney Reign vs. Stephanie Zelaya, Ebon Lurks vs. Carvena Jones and Lil Bri vs. Dylan Jacobs.

The current member of “The Four,” as a reminder, are JeRonelle McGhee, Leah Jenea, Sharaya J and Ali Caldwell.

Along with the latest chapter of the season two competition, Thursday’s “The Four” will also feature two first season contestants. Winner Evvie McKinney and popular contestant Zhavia take the stage for a special performance.

Ahead of the broadcast, FOX shared a set of photos from the taping: 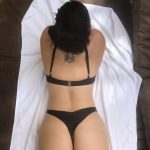