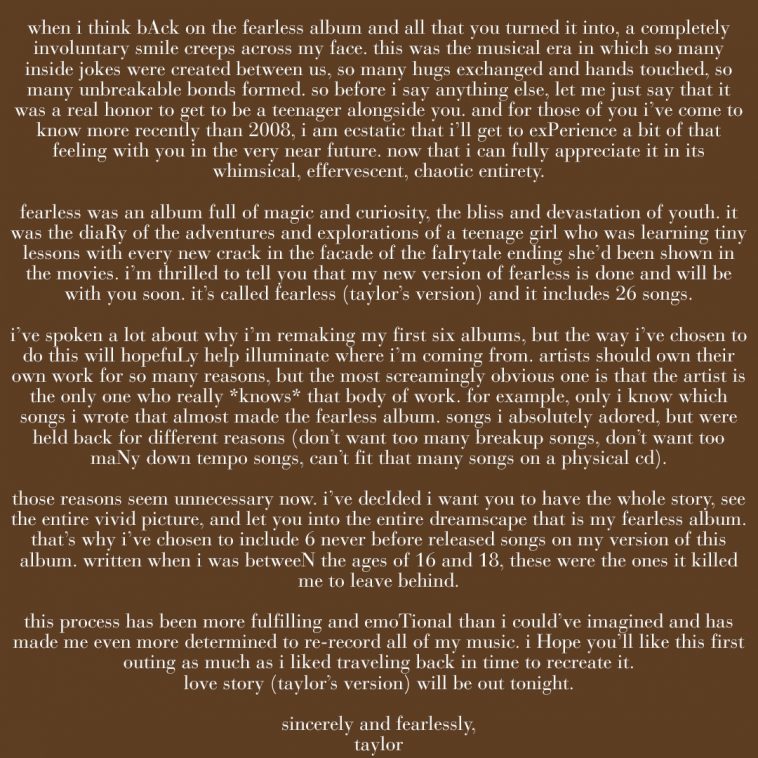 Taylor Swift made her big announcement in conjunction with Thursday’s edition of “Good Morning America.” Consistent with fan speculation, the announcement concerned the re-recording of her earlier music.

Swift revealed that the re-recording of her Grammy-winning “Fearless” will be arriving soon. According to the artist’s announcement, the project will include 26 total tracks.

“I’ve spoken a lot about why I’m remaking my first six albums, but the way I’ve chosen to do this will hopefully help illuminate where I’m coming from,” wrote Swift. “Artists should own their own work for so many reasons, but the most screamingly obvious one is that the artist is the only one who really *knows* that body of work. For example, only I know which songs I wrote that almost made the fearless album.”

Fittingly, the project will be branded as “fearless (taylor’s version).” It, moreover, will include six previously unreleased songs that she wrote between the ages of 16 and 18.

The album will also feature re-recordings of the original 13 tracks, the six initially released bonus tracks, and “Valentine’s Day” soundtrack cut “Today Was A Fairytale.”

Swift did not explicitly announce a release date for the full album, but she did include “April Ninth” as a hidden message in her social media statement. Given that April 9 is a Friday, many fans are assuming that it is, in fact, the album’s official launch date.

The artist, moreover, announced that her new version of lead single “Love Story” will be arriving tonight (presumably at 12AM ET February 12 / 9PM PT February 11).

Swift has confirmed plans to re-record music from her first six albums, for which she does not own the original masters. The sale of the masters — first as part of the Scooter Braun-led purchase of her old label home Big Machine and later from Braun’s Ithaca Holdings to Shamrock Capital — sparked considerable industry debate.

I’m thrilled to tell you that my new version of Fearless (Taylor’s Version) is done and will be with you soon. It has 26 songs including 6 never before released songs from the vault. Love Story (Taylor’s Version) will be out tonight. Pre-order now at https://t.co/NqBDS6cGFl 💛💛 pic.twitter.com/Vjyy2gA72O