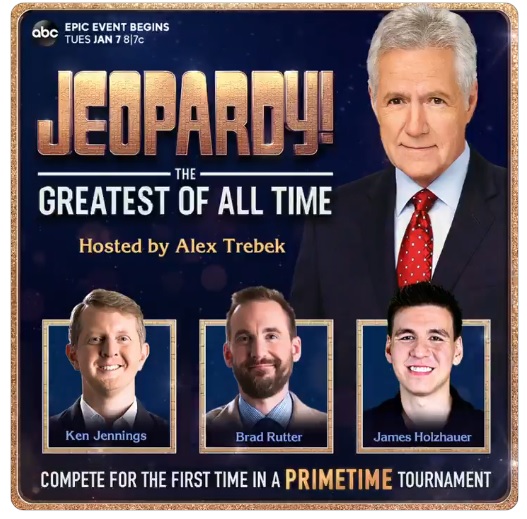 Jeopardy - Greatest Of All Time via @abcnetwork on Twitter

Ever since James Holzhauer’s game-changing run on “Jeopardy” earlier this year, fans have been clamoring for a “greatest of all time” showdown with Holzhauer, Ken Jennings and Brad Rutter.

This January, they will get their wish.

ABC today announced plans for a primetime “Jeopardy” tournament fittingly titled “Jeopardy! The Greatest Of All-Time.” Holzhauer, Jennings and Rutter will compete in a series of matches; the first to win three will be crowned the GOAT and receive $1 million. The runners-up will each receive $250,000.

Iconic “Jeopardy” host Alex Trebek will perform that duty during the tournament.

Arguably the most famous “Jeopardy” contestant, Jennings boasts the record for longest win streak (74 games). In addition to holding the most total winnings ($4.7 million), Rutter has never lost to a human opponent. Thanks to his inventive style of play, Holzhauer boasts the 15 greatest single-day winnings.