In support and celebration of the project, the a capella group performs on Monday’s edition of “The Late Late Show With James Corden.”

Per a Tweet from the official Pentatonix account, the five-piece act performs “Sweater Weather.” The performance closes an episode that also features a discussion with Octavia Spencer and Jesse Williams.

Taped earlier in the day, Monday’s “Late Late Show” began airing at 12:35AM on the east coast — and will air at that time on the west coast. A video and photos follow: 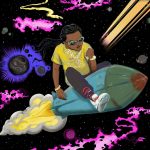