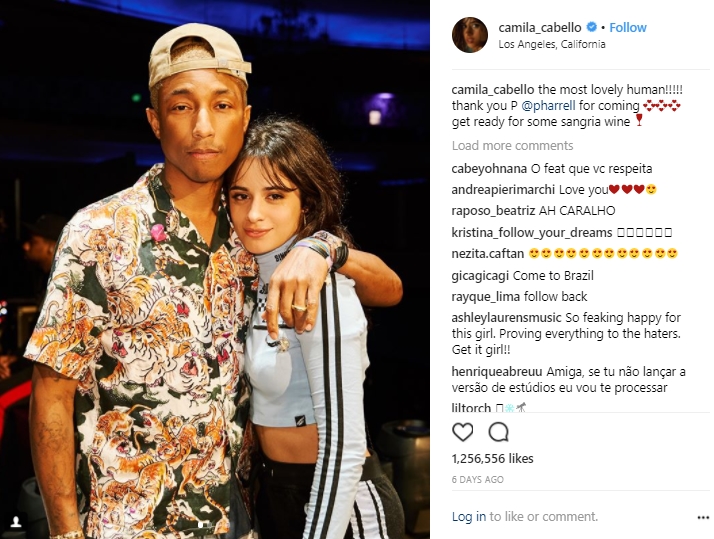 At concerts for her “Never Be The Same Tour,” pop star Camila Cabello has been performing an unreleased track entitled “Sangria Wine.”

The track, which sounds more in the vein of global smash “Havana” than anything from her debut solo album, includes vocals from co-writer Pharrell Williams. Williams actually joined Cabello to perform the song at a Los Angeles show.

Following that performance, Cabello posted an Instagram photo with Pharrell, urging fans to “get ready for some Sangria Wine.” Fans, accordingly, prepared for the release of a recorded version.

The Columbia Records radio team just doubled down on that tease.

In an email to radio professionals, the team features the Instagram post — including the “get ready for some Sangria Wine” caption — under the list of songs “coming soon.” The new James Arthur/Juicy J/Marshmello collaboration is also identified as “coming soon.”

Insofar as Columbia is Pharrell’s label home (Cabello is signed to fellow Sony Music label Epic), the speculation is that “Sangria Wine” may be promoted as a proper Pharrell single (with Cabello perhaps sharing lead billing). A co-venture between the two Sony-based labels is also possible.

Additional details are not yet available.

I think I'm seeing an interesting picture in the draft for the new Columbia Radio Newsletter, but maybe I'm just drunk on Sangria Wine.