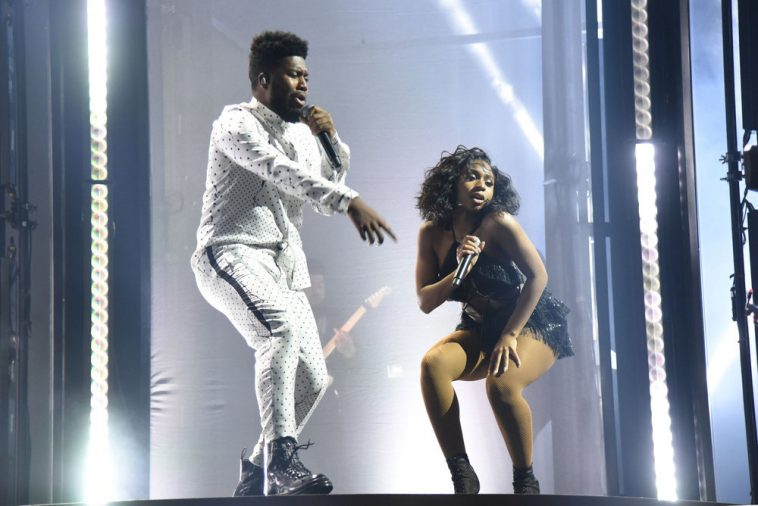 After spending the past several years on ABC, the Billboard Music Awards moved to NBC for Sunday night’s ceremony.

The network may have been new, but the show was basically the same.

The three-hour ceremony featured some very recognizable names — with some very legitimate talent. But it ultimately felt like the same pedestrian affair viewers have come to expect from the Billboard Music Awards.

Host Kelly Clarkson provided a plethora of charm and a touching call to action regarding gun violence, but she offered nothing in the way of an edgy, “kick yourself for missing it” water-cooler moment. Several performances were “good,” but none even remotely assembled “moments.”

Indeed, the simplest way to describe the 2018 Billboard Music Awards ceremony is “watchable.”

There are, however, some specific takeaways worth addressing.

Ed Sheeran and the Dublin crowd were superstars
In most cases, remote performances feel distant and flat. They do not when Ed Sheeran is involved.

Performing before a packed venue in Dublin, Ed Sheeran’s “Galway Girl” did not possess the intimacy of his critically acclaimed, close-knit, crowd singalong from the iHeartRadio Music Awards.

It was just as resonant. LIfted by an energetic crowd and Sheeran’s unique ability to scale personal emotion, the performance felt more tangible and engaging than just about anything that took place in the actual MGM Grand venue.

At the 2018 ceremony, they took the stage as soloists.  Cabello performed “Sangria Wine” with Pharrell and her global smash “Havana,” while Normani joined forces with Khalid for “Love Lies.”

Both shined in unique, yet utterly compelling ways.

Already an established solo star by virtue of hits like “Bad Things,” “Havana,” and “Never Be The Same,” Cabello showcased her unique brand of charisma — and undeniable sense of artistic connection. She may have worked the stage like a conventional “pop star,” but she never fell victim to the stereotype associated with the genre. She never once came across as distant or mechanical.

Accessible, personable and engaging, Cabello instead represented a magnet for the crowd’s attention — and interest.

On a night in which some performances felt rather distant and pedestrian, Cabello’s undeniable investment in her music made a meaningful impression. She cared about her performances, which made viewers care.

If Cabello succeeded in confirming what we already knew about her star quality, Normani succeeded in demonstrating what everyone should have known about hers. It is significant.

From the moment she took the stage for her part in “Love Lies,” Normani demonstrated remarkable degrees of swagger and poise. Her dancing and movement was stunning — and not simply in an “athletically impressive” sense. It was completely organic to the song, entirely demonstrative of her personality, and thus wholly captivating.

Combined with her confident, commanding singing (and an admirable job of engaging with the far lower-key Khalid), the sexy, energetic effort firmly positioned Normani as “one to watch.”

Clarkson’s effort was hindered by the song, while Aguilera and Lovato may have lost some viewers with the loud, occasionally screamy “sing-off” toward the end.

On the whole, however, there is no denying that all three acts can sing.

While songs with more linear, relaxed vocals are presently more resonant on streaming services, there should always be a place for powerhouse vocals in the music world.

They were definitely welcome at this show.

BTS dilemma
On the one hand, the BTS phenomenon should be documented. The group has established an incredible connection with fans around the globe, and it would be preposterous for a chart-driven awards show to completely ignore that feat.

On the other hand, the BTS phenomenon deserves to be experienced organically. The group’s resonance is not an accident; it speaks to the group’s combination of legitimate talent, quality music, electric performances and honest belief in its art.

Sunday’s broadcast seemed to swing too heavily in favor of the former. Rather than giving viewers an extended look at the remarkable show on stage, the camera frequently focused on the supportive audience. TV viewers could see that BTS was generating an intense reaction, but they had little opportunity to personally experience the magic — and react on their own.

And that is a shame, because BTS, its performance style and its new single “Fake Love” could resonate with American viewers if given a true opportunity.  The members of BTS did, moreover, seem to perform quite well.  The moments that received the proper attention were all great.

Granted, jarring camera work and frequent crowd shots were motifs of the show. BTS was certainly not the only act affected.

It was, however, the only act so adversely impacted. Unlike established mainstream stars in the vein of Ariana Grande and Shawn Mendes, BTS lacks familiarity with casual American viewers. It also performs in a style unlike that typically seen on American TV. The BBMAs performance was an opportunity to create the desired familiarity, comfort and resonance. The camera work served to bottleneck that ambition.

It is also important to clarify that “crowd shots” meant something different for BTS (random shots of fans) than they did for other artists (shots of big names like Taylor Swift singing and dancing to their songs).

The Middle resonates
Zedd, Maren Morris and Grey’s performance of “The Middle” did not feature elaborate choreography, intense visuals, edgy theatrics or a transformed arrangement.

It did, however, feature a very special attraction: the song itself.

Since formally launching during Target’s annual Grammy Awards commercial, “The Middle” has resonated with mainstream American music fans. Thanks to Morris’ raspy vocals, the catchy hook or the intoxicating production, “The Middle” makes listeners take notice, before they start singing and dancing along.

While far from an iconic television moment, Sunday’s performance featured those key ingredients — and thus clicked with viewers. The song quickly jumped back into the Top 3 on US iTunes.

What Happened To The Other Genres?
In a teaser for Sunday’s show, host Kelly Clarkson expressed appreciation that Billboard has charts spanning all genres.

Its awards show, unfortunately, barely featured representation from any.

Even though hip-hop is presently dominating the charts (a reality mentioned during the actual broadcast), the bill barely included any modern hip-hop stars.

The lineup was dominated by broad, mainstream pop acts. And, to make matters worse, many of those pop acts have performed at numerous awards ceremonies and talk shows over the past year. Virtually none felt like a fresh, special, “unique” attraction.

The performance by Icon Award winner Janet Jackson was an exception. But given the declining ratings and cooling buzz to which awards shows have fallen victim over the past few years, shouldn’t “different” performances be the exception rather than the rule?