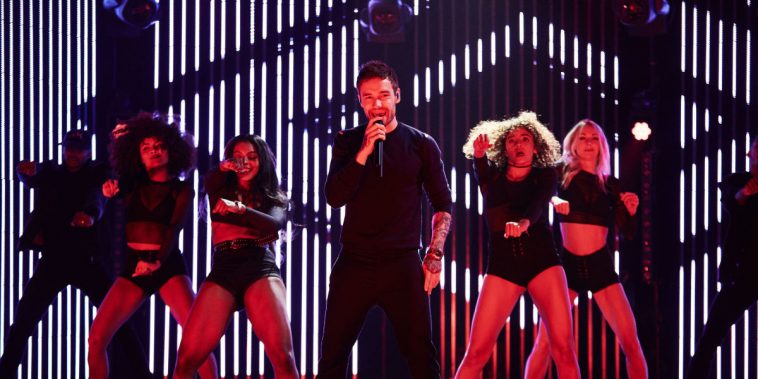 Liam Payne’s “Strip That Down (featuring Quavo)” is set to reach #1 on this week’s Mediabase pop radio airplay chart.

The One Direction member’s debut solo single received 2,412 spins on Sunday, which marked the first day of the October 1-7 tracking period.

Up 10.1% from last Sunday’s mark, the count positions “Strip That Down” at #1 on Mediabase’s building pop chart.

“Strip That Down” faces no imminent threat from below and should thus have no trouble retaining its position through the close of tracking.

— “Strip That Down” was #2 on this past week’s Mediabase pop chart, which ranks songs based on airplay from September 24-30.

It, meanwhile, claims #1 on the corresponding Billboard Pop Songs chart. That chart is based on a September 25-October 1 tracking period (and also uses a slightly different panel). The Monday-Sunday tracking week worked to the advantage of “Strip That Down,” which had been gaining on Niall Horan’s “Slow Hands” each day.

The Mediabase chart is generally viewed as the more definitive pop airplay chart, so true aficionados will wait until the official Mediabase chart emerges this coming Sunday.

An alert from Republic’s Radio Promotions team, for example, notes that “Strip That Down” is the building #1 song on Mediabase’s chart — rather than the official #1 song on Billboard.

Still, one can accurately claim that “Strip That Down” is the #1 song at pop radio.

Charles Suchs is a news reporter and chart analyst for Headline Planet.

While he contributes to all sections of the publication, he devotes specific attention to tracking radio charts and promotional strategies.