Labeled “recurrent” by Mediabase, Taylor Swift’s lead “1989” single “Shake it Off” has officially been removed from the pop radio airplay chart.

Swift, however, still claims two positions within the chart’s top forty. In addition to holding the #1 position courtesy “Blank Space,” Swift also registers at #38 with “Style.”

Not even yet confirmed as an official single, “Style” rises thirteen places to officially claim its top 40 position. Per Mediabase, it received 932 spins during the January 4-10 tracking week.

(The aforementioned “Blank Space” retains its #1 spot on the strength of 17,627 weekly spins)

— Also new to the top 40 this week is Ne-Yo’s “She Knows (featuring Juicy J).” Despite a modest performance on this week’s pop radio add board, the song commanded enough airplay to officially reach #39 on the chart. The song received 781 spins during the official tracking week. 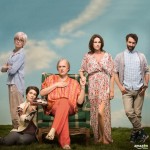