The “Golden” campaign is officially underway.

“Golden” follows “Adore You” and “Watermelon Sugar” as the third proper radio single from “Fine Line.” The previous singles both hit #1 at the pop and Hot AC formats and subsequently demonstrated impressive longevity. “Adore You” is also the reigning #1 song at adult contemporary.

Although the official impact is not until this week, radio programmers have already demonstrated considerable interest in “Golden.” The song debuted on this past week’s Mediabase pop radio airplay chart.

The new music video is available below: 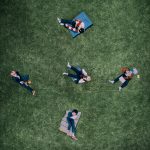