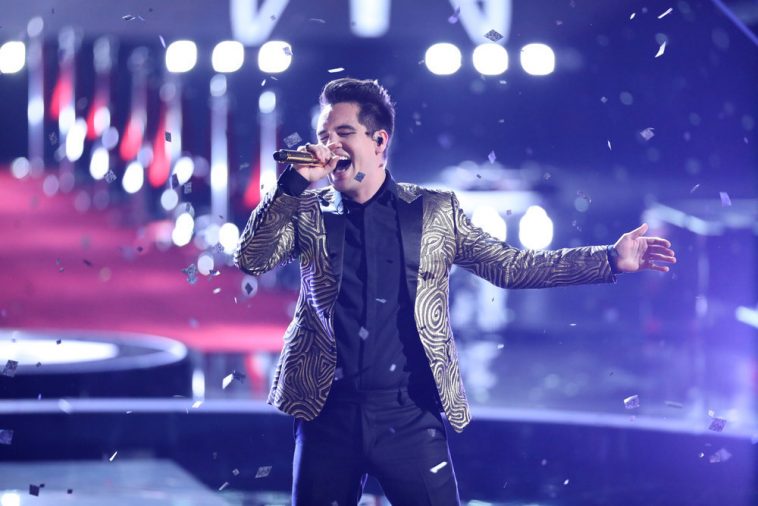 Panic At The Disco on The Voice | Tyler Golden/NBC

Headline Planet is thrilled to release the final part of its annual countdown.

The countdown concludes a list that included “Delicate,” “Youngblood,” “Love Lies,” “Shallow,” and “God is a woman” in its Top 10. Earlier in the countdown, Headline Planet revealed “Eastside,” “Lucid Dreams,” “Consequences,” “The Middle,” and “Whatever It Takes” as Top 15 hits and “breathin,” “Psycho,” “In My Blood,” “Girls Like You,” and “This Feeling” as part of the Top 20.

This year’s Top 5 includes hits from some of the same performers (and songwriters) as some of those earlier entries. Featuring multi-format crossovers, career-defining singles, and a compelling collaboration, the Top 5 reveals the best that pop radio had to offer in 2018.

As a reminder, eligible songs had to first chart at pop radio in 2018. They also had to reach the Top 20 on an official airplay chart.

Without further ado, here they are!

To achieve success, the collaborations will have to deliver something special. They will have to survive on merit rather than gimmick.

“Delightful immersion” is the best way to describe Marshmello’s taut, nuanced production. The incredibly striking, utterly glorious production instantly commands — and retains — listener attention. It is impossible to ignore, and it is impossible to imagine anyone having a problem with that.

“Happier” is not, however, merely a showcase for Marshmello’s production skills. Bastille’s Dan Smith amplifies the gorgeous melody and relatable lyrics with a powerful, emotional, stunning vocal showcase. The music may be fun and catchy, but the superb vocals and lyrics produce a resonant final product.

Collectively, the factors create a song that works on all fronts. It holds up as a dance effort, as a mainstream pop song, and as a compelling exercise in storytelling.

The factors resulted in one of the best pop hits of 2018.

Although they resonated incredibly well with pop audiences, Post Malone’s “rockstar” and “Psycho” ultimately still count as rhythmic/hip-hop songs. Their success confirmed his ability to make crossover hits rather than his standing as a bona fide, unmistakable pop star.

His 2018 smash “Better Now” most certainly does cement that “pop star” status. A pure pop song not spiritually dissimilar from Justin Bieber’s “Purpose” singles, the record does not rely on crossover appeal (though it did fare well at rhythmic). It does not receive “cool points” for being a hip-hop song.

It resonates with pop listeners for a rather simple reason: it is a legitimately fantastic pop song buoyed by a legitimately enthralling pop performance.

From start-to-finish, Post Malone sings with the charisma, command and appeal of a tried-and-true pop hitmaker. He believes in what he is singing, and he knows how to universalize his message. He remains true to the persona he established with his earlier hits, but his connection here is not predicated on reputation or hype. It is a far rawer, more human form of resonance. It is the kind of connection only the most compelling of pop stars are able to make.

It obviously helps that “Better Now” is a masterclass in songwriting and production. The lyrics are strong, the melody is captivating, and the beat is immersive. The core of the record is absolutely excellent.

Post Malone does, however, deserve credit for not simply rising to the standard set by that core. He delivers a performance that takes it to the next level.

He delivers a performance that makes it one of 2018’s best pop hits.

Dating back to her first releases, Halsey has demonstrated a remarkable sense of artistic identity. She has always known who she is — and what she wants to say.

In “Without Me,” Halsey discovers the best possible vehicle for communicating her identity. She has never sounded better, and her message has never been louder. Not merely a great record, “Without Me” is the perfect Halsey record.

A pop track with some hints of alternative edge and rhythmic sensibility, it provides the perfect platform for Halsey to connect with audiences. It is exactly the type of song she should be making.

The lyrics and compositional progression could not feel more natural, honest or true to the Halsey brand. They may lead to a more accessible, inviting product than any of her previous singles, but they never stray from what makes Halsey Halsey. She is not reaching for the market; she and her co-writers made a song that makes the market enthusiastically reach for her.

The brief, yet immensely effective “Cry Me A River” interpolation underscores the brilliance and authenticity of the songwriting. The interpolation — like every other aspect of the song — completely fits. It neither feels jarring nor exploitative.

Halsey also delivers the strongest, most dynamic vocal performance of her career. Whereas so many mainstream singers settle for monotonous indifference, Halsey ensures every note packs a clear emotional punch. To properly capture the mood of the song, she seamlessly oscillates from vulnerability, to angst, to cynicism, to command. Only one thing holds constant: her voice always sounds gorgeous.

With unique style, a refreshingly honest persona, a “safely edgy” aura and a radiant sense of likability, Halsey has faced no trouble amassing a passionate fanbase. With “Without Me,” she manages to powerfully connect with that fanbase while also attracting those who do not “get” the overall Halsey persona.

Ariana Grande may very well be the voice of her generation.

Need proof? Explore her social media feeds. Whereas so many celebrities and brand ambassadors either seem like distant, stiff “promoters” or corny “try-hards,” Grande consistently comes across as a real, relatable, endearing twentysomething. She effortlessly uses trendy slang and sincerely chats with her fans. Her content organically achieves the true goal of social media: to humanize her brand.

The lyrics are infinitely striking, clever, quotable and memorable in large part because Grande and her co-writers did not set out to deliberately achieve those goals. The goal was to share real feelings — in language that Grande (and her target audience) would actually use. That honest expression results in a song that comes across as so much more compelling — and so much more meaningful — than the hollow attempts at edge or poetry we so often see.

Not simply attune to the language of today’s generation, Grande is also very cognizant of its sound. More importantly, she is perfectly capable of capturing that sound in her music.

By pairing super-modern production with tried-and-true pop melodies, Grande creates music that appeals to all forms of music consumers. It is the kind of music pop and adult contemporary fans want to buy and younger, rhythmic-minded listeners want to stream. It is the kind of music that can win passionate support from mainstream pop “stans” without alienating the more indifferent, more casual of today’s listeners.

Grande’s once-in-a-generation voice remains central to success, but songs like “thank u, next” reveal her consistent improvement when it comes to using the voice. The vocal on this particular track may not be her most “powerful” or “impressive” technical showing, but it is perhaps her most effective. The incredibly dynamic vocal track is always where it needs to be. It is always perfectly capturing the tone of the song.

“thank u, next” is a multi-faceted statement about Grande’s talent, relevance and resonant. It was also the year’s #2 pop hit.

In early 2017, Panic! At The Disco delivered a showstopping rendition of “Death Of A Bachelor” on “The Tonight Show Starring Jimmy Fallon.” A straight-ahead version of the song, there was nothing superficially special about the performance.

And that is exactly why it was so remarkable. Instead of benefiting from gimmicks or trickery, Panic! face Brendon Urie made a massive statement purely with his natural talent. From powerhouse vocals, to incredible energy, to undeniable charisma, Urie demonstrated all the qualities of an elite pop star. His group may have been years removed from mainstream dominance, but with the right record, there was every reason to believe he could still make major waves within the pop landscape.

An absolutely perfect pop song, “High Hopes” blends motivational lyrics with an infectious melody and enchanting production. It is one of those “know it when you hear it” songs — the type of record mainstream songwriters, singers and producers work their entire lives to create. The type of record that makes everyone — regardless of demographic or region — smile.

Urie’s commanding vocal performance somehow makes the fantastic record even stronger. He effortlessly captures and communicates the spirit of the song, perfectly projecting the song’s sense of fun. No remotely talented artist would have struggled to turn “High Hopes” into a good record, but Urie’s special, sincere, unrivaled energy makes it an unforgettable one.