Cardi B in Money | Atlantic

Two songs jump into the Top 10 on this week’s Mediabase rhythmic radio chart, and both involve Cardi B.

The hip-hop superstar’s own “Money” flies six places to #9. Pardison Fontaine’s “Backin It Up,” which features Cardi B, concurrently jumps four places to #10.

— Both songs are also charting well at urban radio. “Money” climbs one place to #3 this week, while “Backin It Up” makes the same four-place jump to #10 on the urban format’s Mediabase chart. 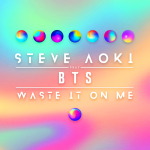