CBS and the Recording Academy did not outright reveal the identity of Lang Lang’s collaboration partner, but by noting that he will “add his musicality to one of this year’s most infectious songs,” their official press release narrowed down the list of intuitive possibilities.

When it comes to songs that would simultaneously adhere to the “infectious” label and fit into the Grammys dynamic, Taylor Swift’s “Shake it Off,” Meghan Trainor’s “All About That Bass,” Iggy Azalea’s “Fancy” and Pharrell’s “Happy” seemingly represented the clearest options.

And insofar as Swift explicitly said she is not performing and Trainor and Azalea are not featured on what the Recording Academy calls a final list of performers, the possible pairing between Lang Lang and confirmed Grammys performer Pharrell emerged as the logical frontrunner.

A photo from Friday’s Grammys rehearsal is careful not to definitively affirm that guess, but it definitely adds credibility to the speculation.

The shot captures Pharrell, Lang Lang, Tal Wilkenfield and Hans Zimmer at the rehearsal. It does not actually feature them on stage, but it certainly offers reason to believe the four musicians will be collaborating at the 57th Annual Grammy Awards ceremony.

Whether this indeed (and completely) solves the mystery surrounding Lang Lang’s collaboration remains to be seen, but it is a shot that does exist. And it follows, courtesy CBS: 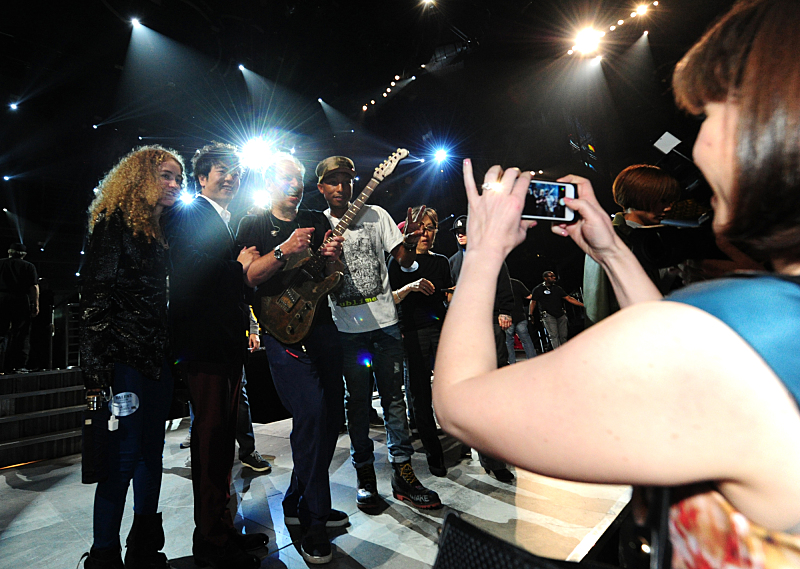