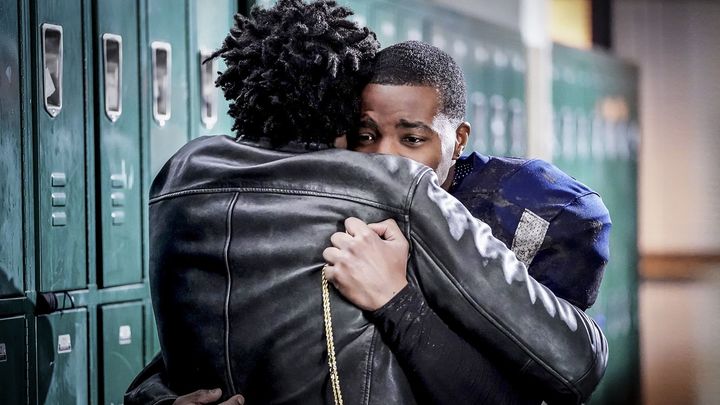 Earlier this week, NBC, FOX, ABC and CBS announced their lineups for the 2019-20 season.

Thursday, The CW did the same.

The network confirmed its scheduling plans, revealing that new series “Batwoman” and “Nancy Drew” will be joining the roster this fall. New show “Katy Keene” will launch at midseason, as will returning series “Legends Of Tomorrow,” “In The Dark,” “The 100,” and “Roswell, New Mexico.”

Changes include moving “All American” to Mondays, shuffling “Arrow” to Tuesdays, and relocating “Charmed” to Fridays.

Kate Kane (Ruby Rose) never planned to be Gotham’s new vigilante. Three years after Batman mysteriously disappeared, Gotham is a city in despair. Without the Caped Crusader, the Gotham City Police Department was overrun and outgunned by criminal gangs. Enter Jacob Kane (Dougray Scott) and his military-grade Crows Private Security, which now protects the city with omnipresent firepower and militia. Years before, Jacob’s first wife and daughter were killed in the crossfire of Gotham crime. He sent his only surviving daughter, Kate Kane, away from Gotham for her safety. After a dishonorable discharge from military school and years of brutal survival training, Kate returns home when the Alice in Wonderland gang targets her father and his security firm, by kidnapping his best Crow officer Sophie Moore (Meagan Tandy). Although remarried to wealthy socialite Catherine Hamilton-Kane (Elizabeth Anweis), who bankrolls the Crows, Jacob is still struggling with the family he lost, while keeping Kate –– the daughter he still has –– at a distance. But Kate is a woman who’s done asking for permission. In order to help her family and her city, she’ll have to become the one thing her father loathes –– a dark knight vigilante. With the help of her compassionate stepsister, Mary (Nicole Kang), and the crafty Luke Fox (Camrus Johnson), the son of Wayne Enterprises’ tech guru Lucius Fox, Kate Kane continues the legacy of her missing cousin, Bruce Wayne, as Batwoman. Still holding a flame for her ex-girlfriend, Sophie, Kate uses everything in her power to combat the dark machinations of the psychotic Alice (Rachel Skarsten), who’s always somewhere slipping between sane and insane. Armed with a passion for social justice and a flair for speaking her mind, Kate soars through the shadowed streets of Gotham as Batwoman. But don’t call her a hero yet. In a city desperate for a savior, she must first overcome her own demons before embracing the call to be Gotham’s symbol of hope. Based on the characters from DC, BATWOMAN is from Berlanti Productions in association with Warner Bros. Television with executive producers Greg Berlanti (“Arrow,” “The Flash,” “Supergirl”), Caroline Dries (“The Vampire Diaries,” “Smallville”), Geoff Johns (“Arrow,” “The Flash,” “Titans”) and Sarah Schechter (“Arrow,” “The Flash,” “Supergirl”). David Nutter (“Game of Thrones,” “The Flash,” “Arrow”) and Marcos Siega (“The Vampire Diaries,” “You”) executive produced the pilot.

Nancy Drew (Kennedy McMann) is a brilliant teenaged detective whose sense of self had come from solving mysteries in her hometown of Horseshoe Bay, Maine – until her mother’s untimely death derails Nancy’s college plans. Devastated by her mother’s passing, Nancy swears off crime-solving while crossing off the days until she can re-apply to college. But when a socialite is murdered, Nancy finds herself a prime suspect in the crime, along with a group of other teens present at the scene: Nancy’s nemesis from high school, George Fan (Leah Lewis); a rich girl with a mysterious past, Bess Marvin (Maddison Jaizani); Nancy’s secret boyfriend, Ned “Nick” Nickerson (Tunji Kasim), and amiable burnout Ace (Alex Saxon). The five of them must team up to clear their own names – encountering emotional entanglements and even more mysteries along the way. Nancy’s reawakening brings her into conflict with her widowed father, Carson Drew (Scott Wolf), who is dating Detective Karen Hart (Alvina August). And, when a supernatural presence begins to haunt Nancy’s investigation, she discovers that the current crime has an astonishing connection to the unsolved murder of a local girl. Whether the ghost is here to help, or hinder Nancy remains to be seen, but one thing’s for sure: Nancy’s going to have to unravel the clues from both the living and the dead to solve the crimes. Executive produced by Noga Landau (“The Magicians”), Melinda Hsu Taylor (“The Gifted,” “The Vampire Diaries”), Josh Schwartz (“Gossip Girl,” “Dynasty,” “Runaways”), Stephanie Savage (“Gossip Girl,” “Dynasty,” “Runaways”) and Lis Rowinski (“Dynasty,” “Runaways”), NANCY DREW is a production of CBS Television Studios in association with Fake Empire.

A RIVERDALE spinoff, KATY KEENE follows the lives and loves of four iconic Archie Comics characters — fashion legend-to-be Katy Keene (Lucy Hale), singer/songwriter Josie McCoy (Ashleigh Murray), performer Jorge Lopez/Ginger (Jonny Beauchamp), and “It Girl” Pepper Smith (Julia Chan) — as they chase their twenty-something dreams in New York City…together. Katy designs clothes for anyone she can, including her friend and roommate Josie, whose singing talent catches the attention of Alexander Cabot (Lucien Laviscount), a CEO who hopes to reboot the record label division of his father’s corporate empire. But Alexander’s dream of signing Josie to a recording contract meets resistance from Cabot Media’s powerful senior vice president Alexandra (Camille Hyde), who also happens to be his twin sister. Josie and Katy’s roommate Jorge works at his family’s bodega and has his eye on Broadway, but after a series of rejections, he hopes to take his drag performance career as Ginger to the next level. The mysterious Pepper Smith plans to open her own version of Andy Warhol’s Factory. She has the connections, but no one seems to know where she got her money — or if she really has any at all. Katy struggles to manage the pressures of her day job at Lacy’s Department Store and her very demanding boss, Gloria (Katherine LaNasa), who is a legendary personal shopper. But Katy has the support of her longtime boyfriend, KO Kelly (Zane Holtz), who has his own dream of becoming a professional boxer. As these aspiring artists take on the runway, the recording studio, Broadway, and the NYC social scene, they will find more than just a career in the big city — they’ll find long-lasting friendship. Executive produced by Greg Berlanti (“Arrow,” “The Flash,” “Supergirl,” “DC’s Legends of Tomorrow”), Roberto Aguirre-Sacasa (“Supergirl,” “Glee”), Michael Grassi (“Riverdale,” “Supergirl”), Sarah Schechter (“Arrow,” “The Flash,” “Supergirl,” “DC’s Legends of Tomorrow”) and Jon Goldwater (Archie Comics Publisher & CEO), KATY KEENE is from Berlanti Productions in association with Warner Bros. Television and CBS Television Studios.