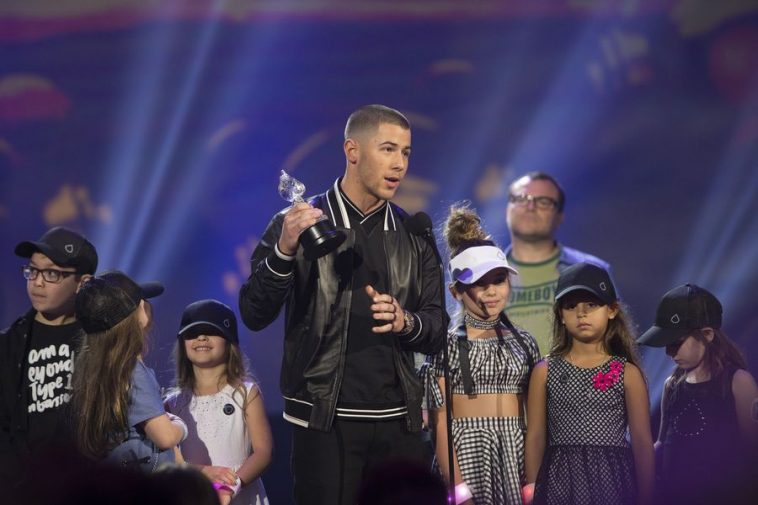 While on the red carpet for the 2017 Radio Disney Music Awards, several notable celebrities met up with the Disney Channel press team to discuss the show.

Nick Jonas on the RDMA
The beauty of this show is that, at the core, it’s fun. It’s about creating really great opportunities for fans of music and Radio Disney’s music – what they play – to come and experience a great day.

Nick Jonas on winning the HERO Award
I think it’s a beautiful thing where you have a room of kids that really care about a lot of different things…obviously, music, entertainment’s a big piece of that. But, also, how to make a difference in the world. I’m being honored today with the HERO Award, which feels strange and amazing. I don’t feel like I deserve it when I’m in the room with so many amazing kids.

Nick Jonas on Britney Spears winning the Icon Award
I go back to so many moments in my childhood and as an adult where Britney really was such an important piece to pop culture. And, as an artist, [she’s] so inspiring and [it’s] incredible to see a performer who’s been at it as long as she has and still killing it. It’s going to be special tonight seeing her accept this award.

Kelsea Ballerini on Radio Disney and the RDMA
I’m a country artist, and I’m from Nashville, and it’s been really amazing to see Radio Disney embrace my music and be able to see this whole new reach of kids and fans that I didn’t have before.

This is my third year. The first I just came to be here, to experience it. The second year, last year, I got to perform with Daya and I won an award and this year, I get to perform, honor Britney and co-host.

Kelsea Ballerini on Britney Spears winning the Icon Award
She is an icon to me, and that’s so deserving – this award for her. I think that, as a young female artist, she’s inspired me and I know [she has inspired] Hailee and Sofia as well.
The [tribute performance] is going to be really nerve-racking. [It’s] a huge honor to be able to honor her.

Sabrina Carpenter on the RDMA
I’m so excited to be here. I think the RDMAs are such a fun way to bring families together but also just so many different kinds of music. I love seeing how it grows every single year and the different artists coming together. It’s overall great energy.

Jordan Fisher on the RDMA
It’s the Radio Disney Music Awards’ fifth anniversary. I’ve been a part of every year thus far. To be able to host, to be nominated, to perform, it’s a party and I’m so excited to for everybody to see what we’ve been doing. It’s going to be an amazing night celebrating music and family. It’s going to be a blast.

Jordan Fisher on his performance
I’m performing “You’re Welcome” as part of a “Moana” medley with Alessia Cara and Auli’i Cravalho and they’re incredible. You’ve heard them perform before; they’re amazing. To be able to be part of something that has been immortalized in a Disney film and be able to perform it with these incredible vocalists…it’s really special.

Laurie Hernandez on the award she’s presenting
I’m presenting the “Heroes For Change” award, and I’m so excited. It’s about those who do their best for their communities, and I think that’s also very important.

Auli’i Cravalho on the RDMA
It’s the first time I’ve ever been to this, and I’m so excited to be here. I’m performing with Jordan Fisher and Alessia Cara, so I can’t wait for you to see that. It’s just going to be an amazing day.

China Anne McClain on Radio Disney and the RDMA
Music touches everybody, no matter who you are, no matter where you live. Radio Disney is really good about spreading positive messages to kids, so that’s why I wanted to be here.

China Anne McClain on Britney Spears winning the Icon Award
Britney, you better work…can’t say that, I’m just going to leave it there.