A recent social media exchange between BTS member Jimin and singer-songwriter Alec Benjamin spurred a real-life meeting between the two. On August 18, both artists Tweeted photos (and kind words) from backstage at Benjamin’s concert in Seoul.

The artist, who had never before appeared on the chart, takes #8 on this week’s edition of the listing.

BTS, predictably, retains the pinnacle position on the chart, which ranks artists based on social media activity. The superstar group is celebrating its 141st week at #1.

SEOUL WAS AMAZING ! thanks so much for coming to my show, Jimin . 🙂 . @BTS_twt . pic.twitter.com/mBVCKJr7Pk 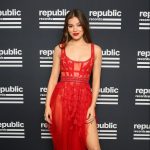