All three Jonas Brothers — Kevin, Joe and Nick — appear in the music video for the band’s comeback single “Sucker.”

They are not, however, the video’s only high-profile stars.

Signifying the return of the beloved trio, Jonas Brothers’ “Sucker” — and the aforementioned music video — launched at 12AM ET Friday morning. The song will be receiving extensive opening day radio exposure.

Kevin, Joe and Nick will provide further support by appearing on all four of next week’s “Late Late Show With James Corden” episodes. Their residency will include an interview on March 4, Spill Your Guts or Fill Your Guts on March 5, Carpool Karaoke on March 6 and a performance on March 7.

Watch the video below: 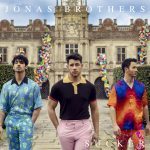