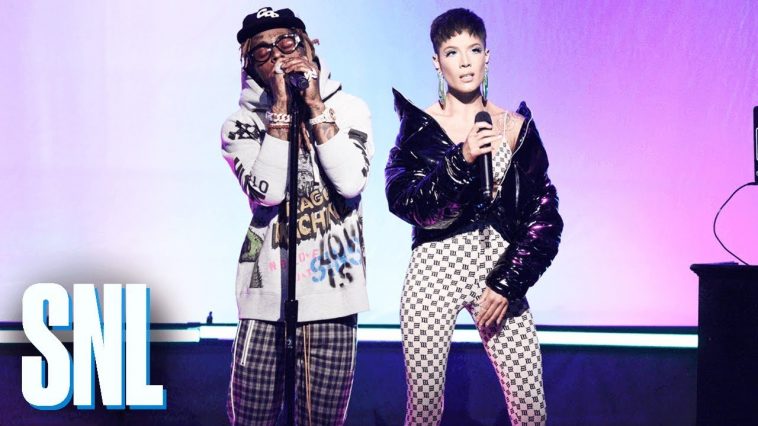 Lil Wayne and Halsey on SNL | Via NBC

Update 2: An hour after posting a cryptic Tweet about nearly fainting from her excitement, Halsey revealed why she was so thrilled.

She was accompanying Lil Wayne for a performance on “SNL.”

Halsey, whose appearance was not advertised in advance, sang the chorus to Weezy’s “Can’t Be Broken.” A video of the performance follows.

Halsey was not Lil Wayne’s only guest during Saturday’s show.. For his second number, Lil Wayne performed “Uproar” alongside Swizz Beatz.
====

In a surprise appearance, Halsey took the stage during Weezy’s first number. She sang the chorus to his “Can’t Be Broken.”

At 11:09PM Saturday night, Halsey posted a cryptic Tweet about her excitement level.

“damn near gonna faint…i’m so excited for this rn.”

Roughly an hour later, the world learned why Halsey was so excited. She made a surprise appearance on NBC’s “Saturday Night Live.”

Halsey accompanied musical guest Lil Wayne for his performance of “Can’t Be Broken.” The pop star sang the chorus for the song, which appears on Lil Wayne’s recently released album “Tha Carter V.”

“Thank u for making this lil girl’s dreams come true,” wrote Halsey. “Just performed “Can’t Be Broken” on @nbcsnl with @LilTunechi !!!!! PINCH ME!”