Camila Cabello may not have performed at the 2018 MTV Video Music Awards, but she certainly made an impact.

The pop star, who was nominated for five awards at this year’s ceremony, took home two of the absolute biggest.

Earlier in the night, Cabello took home the Artist of the Year moonman. The other nominees in that category included Grande, Mars, Cardi B, Post Malone and Drake.

Monday’s ceremony concluded what has been a breakthrough year for the young pop star. The aforementioned “Havana” was just beginning to take flight at this time last year.

It would go onto become a global smash. Follow-up “Never Be The Same” also fared well on the charts, hitting #1 at pop and hot adult contemporary radio. 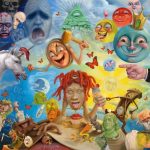