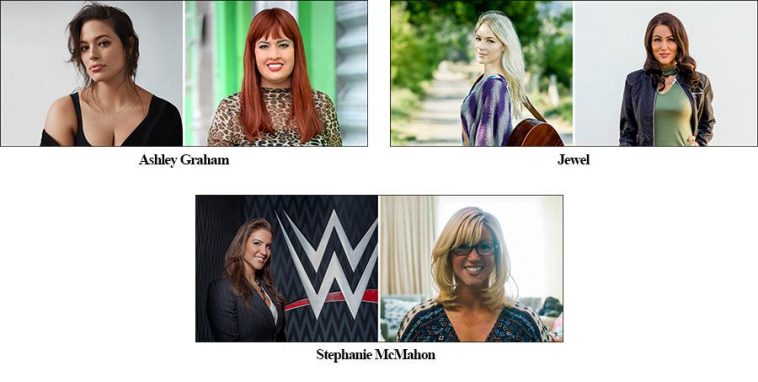 CBS revealed that Jewel, Stephanie McMahon and Ashley Graham will star on upcoming editions of the series.

Jewel will appear in the June 8 episode, while McMahon will headline the June 15 installment. Ashley Graham is set for the June 22 episode.

Jewel – Before being discovered and becoming one of the most successful singer-songwriters of all time, earning four GRAMMY nominations and selling over 30 million albums worldwide, Jewel was homeless and living out of her van. Jewel goes undercover to pay it forward as “Andrea,” a sassy brunette, as she attempts to discover gifted musicians and artisans to recruit for her Handmade Holiday Tour.

Stephanie McMahon – As chief brand officer of WWE, McMahon helps shape one of the most successful sports and entertainment brands in the world. McMahon grew up in the business as daughter of WWE chairman and CEO Vince McMahon, and her husband is 14-time champion and WWE executive Paul “Triple H” Levesque. Stephanie dons a blonde wig and fakes a southern accent as “Sam,” a woman who’s trying to learn about WWE for her blog. McMahon’s journey starts in search of possible new talent for the WWE roster and ends up making dreams come true for a charity-minded young WWE fan.

Ashley Graham – One of the most accomplished models and body activists ever, Graham was the first size 14 model to be featured on the cover of Sports Illustrated Swimsuit Issue, paving the way for her to become one of the most influential voices to reshape the fashion and media industries. Ashley was first discovered in a mall in Lincoln, Neb. and wants to pay it forward by going undercover as the raven-haired, face-pierced “Morgan.” Morgan is an aspiring model who seeks out like-minded curvy models and meets a trailblazing adolescent who defies the conventional body-type for talented dancers.