Update: In what represented her debut on the program, Billie Eilish took the stage on Thursday’s “Tonight Show Starring Jimmy Fallon.”

Eilish, whose is fixture of “artists to watch” conversations, performed “Bellyache” on the popular NBC late-night talk show.

The performance closed an episode that also featured Will Smith and Fran Lebowitz.

A video will be available to view below as of 3:35AM ET. Photos from the taping are already embedded.

Six months after making her late-night debut on “The Late Late Show With James Corden,” Billie Eilish takes the stage on an even higher-profile television program. 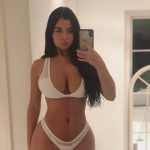