Ariana Grande & John Legend’s remake of the classic “Beauty And The Beast” theme earns a spot on this week’s Billboard Hot 100.

On the strength of its opening week sales and streams, the cover takes #87 on this week’s Hot 100.

Previewing this week’s Hot 100, Billboard’s Trevor Anderson notes that it debuts one place higher than the Celine Dion-Peabo Bryson version.

The Grande-Legend version appears on the soundtrack to the upcoming live action “Beauty And The Beast” film, which opens on March 17. 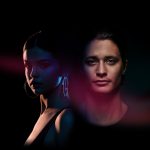